The Secret of KFC's "Eleven Herbs and Spices" have been leaked!
Behold : 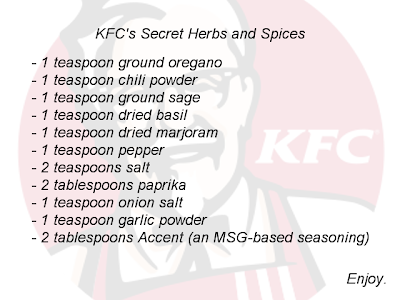 
We've got the KFC Corporation making a BIG boo boo. The Colonel's secret recipe was only the second biggest food secret on the planet, behind Coca Cola's secret formula, until this happened :

"The Colonel's secret flavor recipe of 11 herbs and spices that creates the famous "finger lickin' good" chicken remains a trade secret.[14][15] Portions of the secret spice mix are made at different locations in the United States, and the only complete, handwritten copy of the recipe is kept in a vault in corporate headquarters.[16]
On September 9, 2008, the one complete copy was temporarily moved to an undisclosed location under extremely tight security while KFC revamped the security at its headquarters. Before the move, KFC disclosed[17] that the recipe, which includes exact amounts of each component, is written in pencil on a single sheet of notebook paper and signed by Sanders.[18] It was locked in a filing cabinet with two separate combination locks. The cabinet also included vials of each of the 11 herbs and spices used. Only two unnamed executives had access to the recipe at any one time.[19] One of the two executives said that no one had come close to guessing the contents of the secret recipe, and added that the actual recipe would include some surprises. On February 9, 2009, the secret recipe returned to KFC's Louisville headquarters in a more secure, computerized vault[20] guarded by motion detectors and security cameras. Reportedly, the paper has yellowed and the handwriting is now faint.[18]"
Via : WikiPedia
So, the question is, is the above recipe accurate?


I have not tried the blend listed above to test it, but there seems to be some discrepancy in the amounts of the ingredients and the techniques involved.
Another web site claims this :

Actually there are 11 spices in the KFC combination, but the additional ingredients were used to derive that special flavor of KFC. After you arrange all of these ingredients, place them in a blender and select the incher setting found on the panel, grind it for 3 to 4 minutes to get the desired texture. After it is done you may store it in an airtight container so it will not lose its effectiveness.
The KFC Chicken is always prepared with the help of this secret spice and all purpose flour and that too in a specific proportion. We should reveal the proportion of the spice for you here. To get the perfect blend and taste use about 30 grams of spice mixture to 100 grams of all purpose flour.
This flour mix is used together with egg whites to coat the chicken pieces and pressure fried to create the famous KFC chickens."


Above image and recipe courtesy : KFC Chicken Recipe
The above description has fourteen (14) different ingredients as opposed to the top one which has eleven (11).
So, who is right??


Well, acording to this guy, Ron Douglas, the author of the book America's Most Wanted Recipes, he is the self professed "copycat" cook who has researched many beloved favorite recipes from numerous "chain restaurants" throughout the "Good 'Ole U.S. of A.". Through years of trial and error with his stalwart crew, with often lethal results, he has created this version of KFC's signature eleven herbs and spices :

Taken from America's Most Wanted Recipes, by Ron Douglas via : Recipe Secrets

Mister Douglas should certainly be praised for his dilligence and tenacity in spending six years of his life in the development of his "copycat" flavor.


However, which is the real one?


Differences in ingredients aside, the techniques of the "copycat" recipes also vary considerably. I know for a fact that KFC uses a pressure cooker to do their signature fried chicken in a very short amount of time in order to insure the ideal crispiness and perfection of the product. However, this can be very dangerous and should not be attempted at home, especially in your ridiculously expensive New York City studio apartment. Now, if you are true risk taker, I'd love to see a video of someone attempting the hot fat and pressure cooker method with a good non-life threatening failure, but that's up to braver folk than I. A simple FryDaddy® or a dutch oven with hot oil will be much safer, and without all of the insurance issues.
In addition, KFC uses only Soybean Oil for their pressure cooker fryers, and, apparently, this is a very important ingredient. Soybean Oil has a very high flash point (450°F/232°C) which prevents it from breaking down easily and can be reused, especially if using a pressure cooker. Soybean Oil is also very low in saturated fats (16g), the bad stuff, and very high in polyunsaturated fats (58g), the good stuff. All of this makes it ideal for deep frying and baking (hmmm, how about some deep fried baked goods??? Something tells me that the Scottish have the market cornered on that concept. See National Geographic).


The batter coating is also under some contreversy, as well. Is it buttermilk based, plain milk, creme, are there leavening agents involved, whole eggs, or a combination of eggs and egg whites?


All of this remains to be solved.


So, let me know what you find, out and feel free to use your loved ones as "test subjects" in your experimentation. 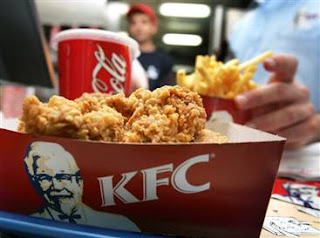 Posted by papalucio at 1:00 AM

papalucio
A burnt out Television Producer with a penchant for food, whiskey, and living.